We recently spent a couple of days in Blackpool  Our main port of call was the Pleasure Beach, but we also stopped off at what we have come to call “The Machines” – otherwise known as an amusement arcade.

Coral Island is the biggest of Blackpool’s many such venues, and was the site of an exciting discovery for me back in the summer of 2004.

I grew up in a seaside town, and spent many happy hours on the pier indulging in some low-level gambling.  My favourite type of machine was always what I call the Tuppenny Falls – the one where you drop your coins in to join a pile of others and hope that some get pushed off the edge and into your winnings tray.   I always knew that this was a game of diminishing returns;  slowly but surely the number of coins going in exceeds the number of coins coming out, until you are left with nothing but an aching shoulder and dirty fingers.

At least, that used to be the case when I was a child.  But what I discovered in that dark and noisy arcade in 2004 is that some places now put small prize items on top of the pile of coins.  These items get pushed to the edge along with the coins, and you can actually end up with something to show for all the time and money you put in.   Even though (as my husband points out every time) the value of the prize is almost certainly less than the amount of money spent winning it.

And so it was that after a week in Blackpool and many hours spent at Coral Island, I returned home with about fifteen or twenty assorted keyrings and other pointless knick-knacks.  Which I was very happy with.

But that was then.  These days I can bag that many prizes in the course of one afternoon, never mind a week.  It’s not just that I have got faster at putting the money in, and it’s certainly not that arcade owners have become more generous.  Our return trip to Coral Island last week made me realise just how much I have learnt about Coin Pushers (to give them their “official” title) in the last seven years.

And now I am going to share some of that knowledge.

The first thing to know is that really dedicated prizewinning requires an assistant.  When one of those coveted keyrings is just on the edge of the shelf and the very next coin could be the one to topple it over, you don’t want to have to leave your machine to get more change.  So try to ensure you have a friend or family member in earshot at all times.

Next, choose your machine.  (I only ever play the 2p versions;  I’ve never been that much of a gambler.)  But whether your plastic tub is full of 2ps or 10ps, what you are looking for is a machine with a narrow shelf and a fast moving pusher.

This is the sort you want… 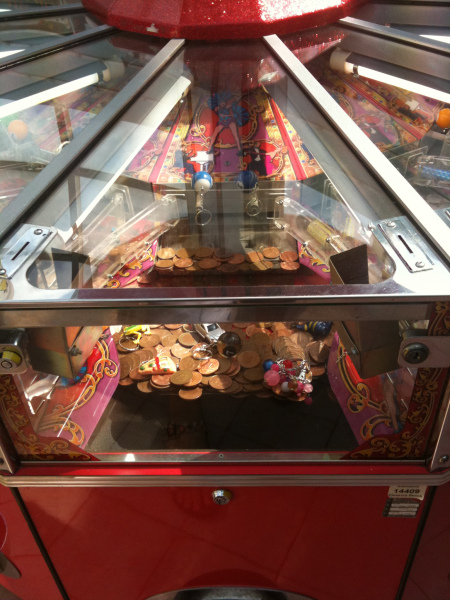 …but don’t bother with this one. 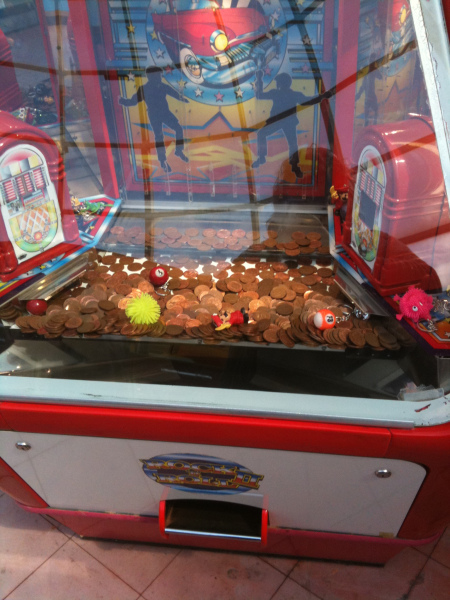 For the perfect machine, as well as the width of the shelf, you should look at the little perspex vertical wall which you can see just at the back of the moving part of the shelf.  This is adjustable, and generous arcade owners will set it at a level that allows only one layer of coins in the back row.  This means that whatever stage of the cycle you drop your coin, it will never be wasted by falling on top of another coin.  This is particularly useful when children are playing, since they don’t normally have the skill to time their coin drop for maximum pushing efficiency.

It’s not often that all three components – narrow shelf, fast pushing, and low wall – come together in one machine, but if you find one like that, don’t leave it until there are no prizes left.  It shouldn’t take long.

Personally I prefer machines where the coin slot is at waist level rather than eye level.  But that is mostly because I normally have a heavy handbag over my shoulder, and a couple of hours spent with that arm raised to coin-slot height gives me neckache.  And a lower slot also means that small children can be recruited to help if necessary.

Eyes on the Prize

When it comes to the prizes themselves, keyrings are quite common and can also be quite easy to win.  This is because they spread themselves out, so you only need to get the ring end or the toy end over the edge of the shelf and the rest will soon follow.  Bracelets are similarly a good thing, especially if they are heavy ones.

Small rubber balls can be almost impossible to win, because they tend to roll backwards once they reach the lip of the shelf edge.  Items still in their plastic packets normally get stuck against the glass on the way down, requiring a visit from the man with the keys –  another reason to make sure you have a helper to hand.  And cuddly toys can throroughly clog up the system.

It is nearly always easier to win prizes of any kind when they are closer to the middle, especially if you can make use of more than one coin slot so the pile of coins is getting pushed from two directions.  On the other hand, prizes that are too close to the side of the shelf tend to disappear into the land of lost prizes, those vast coin boxes that are the reason arcade owners make a living from these machines.

And that’s about it.  Now you know how to choose the best machines and the easiest prizes, all you need to make yourself a winner is a tub full of coins and a bit of patience.  Plus a stubborn refusal to leave the arcade without that one last prize, even when the rest of your family are complaining about empty stomachs and over-running parking meters.

So the next time you are at the seaside, grab yourself some two pence pieces, and before long you too could be the proud owner of a box full of amusement arcade prizes.